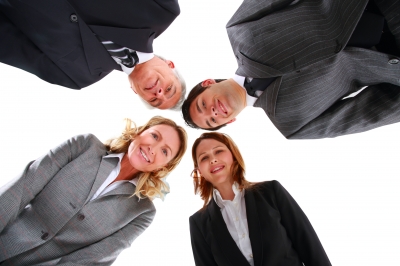 Cooperation isn’t just a “nice-to-do,” it is a survival mechanism for organizations. It also appears that it is the same for the human species. Our evolution has depended on our willingness and ability to cooperate.

Alfred, Lord Tennyson spoke of Darwin’s survival of the fittest principle as a “struggle for life most severe” and “…red in tooth and claw.” But, more recent research shows that we would not have made it as a species without the ability to cooperate.

In an article by Martin A. Nowak (Why We Help, Scientific American, July 2012), he says, “My work indicates that instead of opposing competition, cooperation has operated alongside it from the get-go to shape the evolution of life on earth,…” This is not a new idea.

Lee Alan Dugatkin tells us about a man who in the 1920’s first wrote about this notion, “Today, anthropologists, political scientists, economists and psychologists publish hundreds of studies each year on human cooperation, and researchers in these fields are just beginning to realize that so many of the topics they are investigating were first suggested and promulgated by Peter Kropotkin. ‘In all the scenes of animal lives which passed before my eyes,’ Kropotkin wrote, ‘I saw mutual aid and mutual support carried on to an extent which made me suspect in it a feature of the greatest importance for the maintenance of life, the preservation of each species and its further evolution.’”

Many of us may see our organizations as somewhat of a struggle and maybe even a little savage. But the idea of the “survival of the fittest” persists in organizational lore. It is a compelling idea for many reasons. The “get mine now” way of thinking on its face seems logical. I remember bravely teaching communication skills to inmates in a prison (admittedly, it was a medium-security prison for first time offenders so not really that daring).

Psychologists call this “opportunity cost.” So, they may reason, the choice is simple. “Get it while you can.” Every one of us has been in a situation in which the person in power has made a decision that gets him or her something good in the short term but cost plenty in the long term. This seems especially appealing if someone else has to pay the cost (like the organization).

Cooperation typically requires delayed gratification. You have to wait for the good stuff. Sometimes, the only good stuff you get is a feeling of accomplishment or the satisfaction of having done the right thing. What a concept! It’s called altruism and psychologists and sociologists have been arguing for decades whether such a thing actually exists. (Some argue that the sense of satisfaction is, in fact, a sort of reward).

Researchers, however, have found that intelligence is strongly linked to delayed gratification.

Those who can put off the rewards until later show more activity in the anterior prefrontal cortex, the part of the brain associated with complex problem solving. Tasks like losing weight, stopping smoking, saving for retirement, and building a business all require the ability to wait for the rewards. Unfortunately, the financial systems within organizations and the environment in which they must survive often work against delayed gratification.

Senior executive bonuses are often tied to the financial performance of the previous year. Setting up teams, encouraging collaboration, waiting to hear from all of the stakeholders and so on takes time, often pushing back the financial return by months or even years. On the other hand, conducting layoffs, firing people, cutting research and training budgets shows up on the spreadsheets right away. Also, it is the rare investor who looks at the performance of an organization over the past five or ten years. Buy and sell decisions are often made on what happened yesterday, or in today’s environment of instant information, thirty seconds ago.

The ability to delay gratification has also been used as a way of measuring ethical and moral decision-making.

People with better “impulse control” as psychologists put it, tend to do better in life. They do better in school, are healthier, get better scores on the SAT, are less likely to get into legal trouble, less prone to addiction and were generally more dependable and successful. They are better at managing risk. This is also true of organizations.

In a recent study of financial performance of ethical companies, Jin-Woo Kim found that developing “community” and good “employee relationships” was strongly related to the company’s ability to reduce their risks and perform well financially over the long term.

In game theory (the math used to explain and predict the behavior of large, complex systems), many studies and simulations have demonstrated that cooperation outperforms competition in the long run. The classic simulation is based on what is called the “prisoner’s dilemma.” In this scenario, two thieves rob a convenience store, hide the money but are then arrested. They are interrogated separately so that neither knows what the other will do. Each has a choice to make; confess or remain silent. If both confess, they are convicted and serve an equal sentence, still able to share the loot after they are released. If both remain silent, they must be released (insufficient evidence without a confession) and they are able to share the money. If, on the other hand, only one confesses, the defector is released with a “slap on the wrist” and his or her partner is sentenced to a nice, long vacation in Sheriff Joe’s County Jail. Confessing is considered defection. Remaining silent is considered the cooperative response. The evidence from hundreds of such simulations and studies is pretty clear. Initially, people tend to choose defection. They confess with the hope of getting all, or most, of the money. But, over time, things start to change. What happens is that if, on multiple rounds of decision-making, the players keep defecting, the pool of rewards diminishes, eventually becoming a deficit. Over time, both players end up deeply in debt. It seems, however, that people do finally figure this out. If the simulation is allowed to go on long enough, people start cooperating, even if the immediate reward for each round is less.

The same can happen in organizations but it takes considerable courage from the leaders. The whole idea of teamwork is based on the idea that human beings can postpone rewards, share, “take one for the team,” and so on.

It seems our ability and willingness to do that has been an important factor in our survival as a species. It is also, I believe, a survival factor for organizations. In the simplest terms, an organization in which everyone is working toward the same goals and objectives is far more powerful than one in which leadership and workers are working at cross-purposes. It is easy to make things look good in the short term and many corporate ladder-climbers have developed considerable skill at doing just that.

When I first went to work in corporate America, my mentor gave me a book to read called, “The Ropes to Skip and the Ropes to Know.” One chapter was called “Skating Fast Over Thin Ice.” The idea being that if you wait for the ice to get thicker, someone else may just beat you to the good stuff. Or, if you skate too slowly, you will fall through.

So, stay superficial and move quickly to the next big thing before you crash into the cold water below. You end up looking good but those poor slobs freezing to death in the icy water appear foolish.

I had a colleague who perfected this technique. Any time a new opportunity presented  itself, he would show up at the meeting (usually uninvited) and take over. He would throw out all kinds of big ideas, fanciful notions, risky approaches, and so forth. But, when it came time to do the actual work, he was off to the next new project with more “big ideas.” It was amazing how long he was able to sustain this. After cleaning up a few messes, people caught on and stopped listening to him. We also found out that he had a long history of short tenures with companies and divisions within our company. He always had a story about how “they” just didn’t understand or appreciate his creativity or genius – you know the type.

Teamwork and collaboration is hard work. It is not glamorous. You don’t get famous for being a good team member. But, good leadership, the kind that you really need to build a successful organization that can perform well for a long, long time, absolutely demands it. Good leaders are part of the team. So, if you want the kind of organization that will last, roll up your sleeves and pitch in. Do some of the dirty work.

As they say, “If you want pancakes for breakfast, help make them.”

Journal of Targeting, Measurement and Analysis for Marketing 18, 199-208 (September/December 2010) | doi:10.1057/jt.2010.8 Assessing the long-term financial performance of ethical companies
The Prince of Evolution: Peter Kropotkin’s Adventures in Science and Politics, By Lee Alan Dugatkin