Past research has linked beautiful cities to human happiness. A new psychometric research project by CitiesBeautiful.org focuses on linkages to fifteen categories of civic beauty.  We invite you to participate in that project.

What do our individual concepts of beauty reveal about our perceptions, our motivations, even our priorities in life?  The answers to these questions are far more profound than most people realize.  Dr. Ethel Puffer Howes, professor of aesthetics at Wellesley, Smith and Simmons Colleges, wrote in her all-encompassing, landmark book The Psychology of Beauty1:

”I believe the way is at last opened from the traditional philosophy of aesthetics to a healthy and concrete psychological theory…The beautiful object possesses those qualities which bring the personality into a state of unity and self-completeness.”

Stated differently, we say “beautiful!” when we experience a spontaneous and deeply appreciative connection between our true selves and our surroundings.

Civic beauty is fundamentally important – but what makes a city beautiful?  Innumerable theories have been offered over the last 2,600 years. CitiesBeautiful.org, a website dedicated to the greater appreciation and deeper understanding of civic beauty worldwide, has researched “common threads” in the writings of 40 of the most famous commentators on civic beauty, from the Ancient Greeks up to the present.  The 40 renowned commentators encompass:

Also considered are perceptions of beauty as driven by the biology of the brain. As first theorized by American neuroscientist Dr. Paul MacLean in The Triune Brain in Evolution 5, the human brain consists of three principal components, resulting from three progressive evolutionary periods. Each of the three brains can be linked to differences in how humans perceive beauty.

To recap, then, common threads derive from:

CitiesBeautiful.org’s research has gleaned 15 common threads, hereafter referred to as the 15 “Beautiful Facets”.   All beautiful urban places can be described using the vocabulary of the 15 Beautiful Facets.  The vocabulary is analogous to the terms used in evaluating paintings and other works of art – Balance, Variety, Rhythm, Proportion, Unity, Contrast, Emphasis, and so on.  The Beautiful Facets are just such a vocabulary for civic beauty.

For a detailed description of the methodology used in deriving the Beautiful Facets, see the Beautiful Book tab at the CitiesBeautiful.org website.

The Beautiful Facets are not only fundamental to urban communities but also to individuals as well. Given that “beauty is in the eye of the beholder” (as Plato was the first to say), everyone has different preferences among the 15 Beautiful Facets.  Visitors to the CitiesBeautiful.org website can determine their favorite Beautiful Facets by answering a series of multiple-choice psychometric questions, somewhat like an occupational aptitude test.  The visitors’ answers are automatically analyzed and immediately displayed in a bar chart. 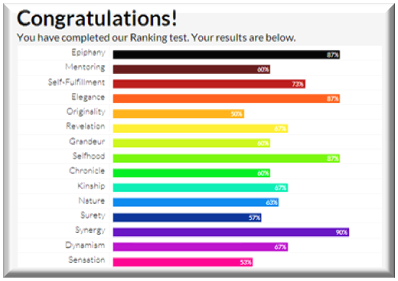 Once visitors establish their preferences among the 15 Beautiful Facets, they can travel virtually to their top beautiful urban places at the CitiesBeautiful.org or put together a list of must-see places for future real-world travels.  For example, an individual who happened to rate the Beautiful Facet of Elegance the highest might naturally first look on the 25 city interactive maps for the (#4 orange) Elegance pins. 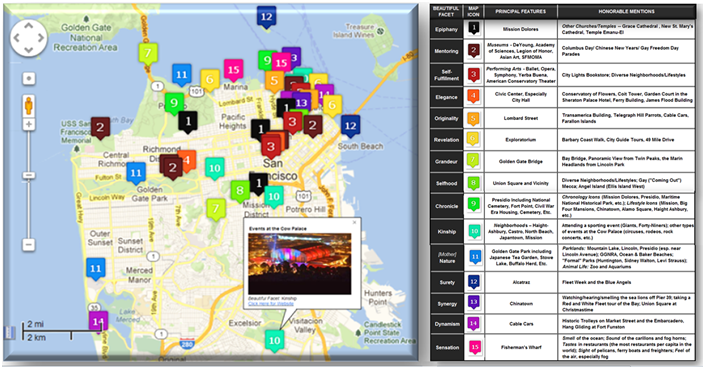 Statistical analyses have been performed on the inputs of hundreds of psychometric test takers from around the world. A number of statistically significant findings emerge when preferences among the Beautiful Facets are compared to the demographics of the test takers (e.g., age, education level, number of countries visited).  Further statistical research is now underway.

Accordingly, to have as large and diverse a statistical sample as possible, we encourage you to take the test at the CitiesBeautiful.org website!