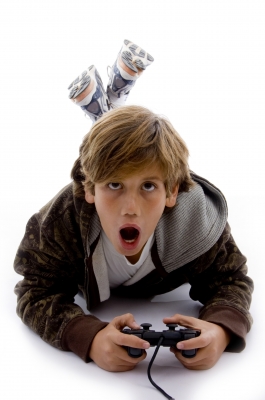 Although traditional video game consoles like PlayStation and Xbox are being challenged by newcomers to the market – namely, affordable and fun “apps” for iPhones or Androids with plenty of amusing and comparable games to choose from – video games will not back down from their celebrated position as a beloved provider of entertainment.

This means that the controversial debate over the psychological effects of video games on children, whether beneficial or harmful, will continue. For parents, this means coming to terms with the fact that violent video games are here to stay, and then examining the psychological research on the link (if any) between these games and aggressive behavior.

Despite competition from games made for handheld devices, video games continue to sell worldwide – especially the violent ones. The Boston Globe reported that when “Call of Duty: Modern Warfare 3” went on sale in November 2012, it brought in over $400 million in sales and sold 6.5 million units in a single day.

[showmyads]Online traffic stats show that kids will continue to ask Santa Claus for Nintendos and PlayStations. Google’s search results in 2012 reveal that “PlayStation” ranked sixth out of all search terms in the Consumer Electronics category – a laudable feat. Some of the more popular games commonly regarded as being extremely violent include Halo, Medal of Honor and Gears of War, among others. With regard to individual video games, online searches for the top-selling M-rated game “Diablo 3” managed to beat out the search term “Olympics”….even in an Olympic year (Plunkett, 2012).

Discussions in the media linking gun violence and video games have increased in recent months, especially following the tragic shootings in Sandy Hook, Connecticut and Aurora, Colorado. However, as many writers and bloggers have already commented on, research data rebuts the assumption that gun violence is a direct consequence of playing violent video games. Simply put, correlation does not necessarily mean causation.

But what does the research actually say?

Psychologists Differ On The Results

It is clear that contemporary video games do contain many violent elements. “Recent video games reward players for killing innocent bystanders, police, and prostitutes, using a wide range of weapons including guns, knives, flame throwers, swords, baseball bats, cars, hands, and feet. Some include cut scenes (i.e., brief movie clips supposedly designed to move the story forward) of strippers. In some, the player assumes the role of hero, whereas in others the player is a criminal” (Anderson, 2003). The scene below illustrates some of the blood, gore and terror on offer:

Psychologists have performed many experiments exploring a potential connection between aggression and video game violence, with varying results. A meta-analytical study exploring violence and aggression conducted in 2001 revealed that “high video-game violence was definitely associated with aggression” (Anderson & Bushman, 2001), and the researchers concluded that “these results clearly support the hypothesis that exposure to violent video games poses a public-health threat to children and youths, including college-age individuals” (Anderson & Bushman, 2001).

On the other hand, some researchers are dubious about the existence of such a distinct link between violent video games and aggression. Despite over 30 studies conducted on the topic, we still have no clear answer because scientists have continuously argued over the procedures employed in different experiments. “The literature on video game effects is littered with mixed findings from studies that use a wide range of games, treatment exposure times, and subject pools, obscuring a clear conclusion ” (Sherry, 2001).

In 2008, experimenters conducted further research and concluded that prior studies had been conducted with poor methodology. They observed that populations were not suffiently controlled in order to come to a conclusion that violent video games were definitely the cause of aggression in children. They argued that other factors – genetics, family environment, and even gender – also contributed to aggression. “For example, individuals genetically prone to aggression or exposed to family violence exposure may have inﬂated violence risk, while also consuming more violent media. Male individuals are, on average, more aggressive and more likely to consume violent media. Failing to control for sex, particularly in bivariate correlations, may produce artiﬁcially inﬂated effect size estimates” (Ferguson & Kilburn, 2008). These scientists were ultimately unable to find a link between media violence exposure and aggression, even though the studies in 2001 purported a connection.

What does this messy pile of research mean for concerned parents?

It is important to remember that studies on aggression and video games have so far contradicted each other and are still unable to provide straightforward answers. There are many factors at work in the development of aggressive behavior. Children who exhibit seemingly excessive aggression or unhealthy mental states may benefit from a visit to a psychiatrist or other trained mental professionals.

While scientists have not been able to prove that playing violent video games causes violent behavior, their continued interest in investigating the subject should serve as a note of caution to parents today. It is essential that parents keep abreast of the latest developments on this important issue and continue to use common sense and judgment if they do allow their children to play violent video games in the home.

Brooke McDonald is an avid blogger and online contributor, including writing for Minnesota Psyciatrist Dr. Allison Holt. She enjoys writing about a variety of topics, including all things pyschology and psychiatry. The views written in this article are from Brooke and may not reflect the views of Dr. Allison Holt.