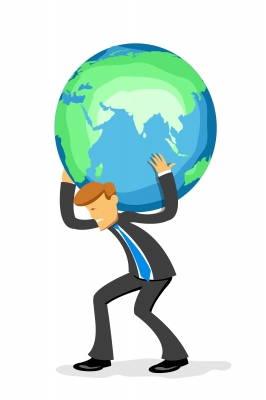 We all have secrets. Some are big, some are small and some we can barely even remember. What are the effects of keeping secrets? While it might preserve a friendship, it can also lead to stress, the depletion of cognitive resources and adverse health outcomes (Penebaker, 1990, cited in Slepian, Masicampo, Toosi & Ambady, 2012). Additionally, a number of persons have deep dark secrets – the type of secret that, if made public, will bring about swift, life-altering and usually unwanted consequences.  Individuals in this situation often complain about carrying a secret, being burdened by a secret or being weighed down. Are these merely linguistic flourishes or is there something more to these metaphorical statements?

Across four compelling studies, Slepian, et al. (2012) examined whether secrets were “experienced as physical burdens, influencing how people perceive and act in the world.” The researchers report:

Study 1 examined whether carrying a secret would influence perceived steepness of a hill, which is known to vary with carrying physical weight (Proffitt, 2006). Study 2 examined perceived distance, another measure sensitive to felt weight (Proffitt, Stefanucci, Banton, & Epstein, 2003), using an action-based measure. Study 3 tested whether the frequency of thoughts about a secret predicted the perceived effort required for physical tasks. Study 4 tested whether suppressing a secret would influence helping behavior for physical tasks. (p.1)

[showmyads] The results of these four studies highlight that individuals seem to feel physically burdened when asked to think about or cover up meaningful secrets. These meaningful secrets being harbored by the participants included important issues such as infidelity and sexual orientation. “People who recalled, were preoccupied with, or suppressed an important secret estimated hills to be steeper, perceived distances to be farther, indicated that physical tasks would require more effort, and were less likely to help others with physical tasks” (Slepian, et al., 2012).

In effect, the bigger the secret and the more the individual thought about the secret, the more he perceived the secret as a physical load. Could the observed results be fully accounted for by mental depletion? The researchers do not think so. We tend to overestimate hill slant and underestimate distances, and cognitive load typically leads to a greater reliance on these default responses. The results show that while subjects in Study 1 did overestimate hill slant, they also overestimated distances. This suggests that mental depletion due to cognitive load might not be the only factor at work. Slepian et al. (2012) suggest that covering up important secrets also leads to greater physical burden and possibly physical overexertion, exhaustion and stress.

So if you are keeping a deep dark secret from your marriage partner, your parents or your significant other, maybe this is a good time to spill the beans. Granted, the consequences might be severe, but hiding the issue and subjecting yourself to prolonged self-torture can’t be a very appealing alternative.