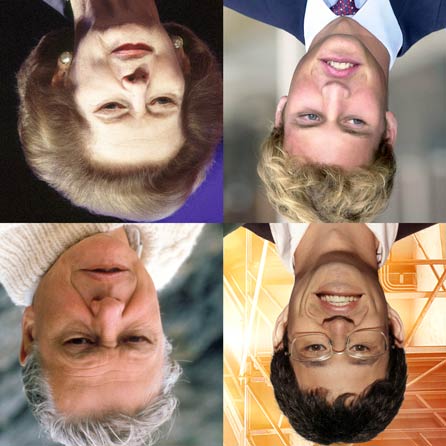 Look carefully…there’s something pretty special about the images above. What’s so great about four upside-down faces you ask? See for yourself. Below we have the same images when positioned right-side-up: 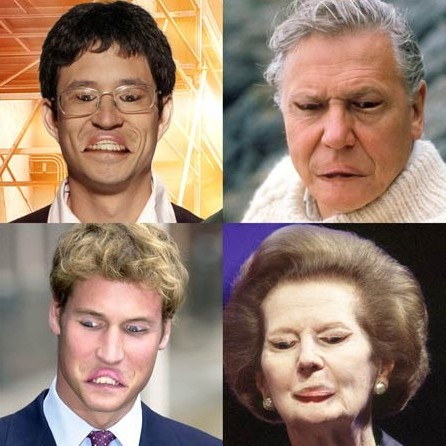 The eyes and mouth are inverted in each image, and while we can clearly see evidence of this when the pictures are right-side-up, we hardly notice the distortion when the same pictures are upside down. This phenomenon is referred to as the Thatcher illusion, as its discoverer Peter Thompson used a photo of Margaret Thatcher (shown below) in his original experiment. 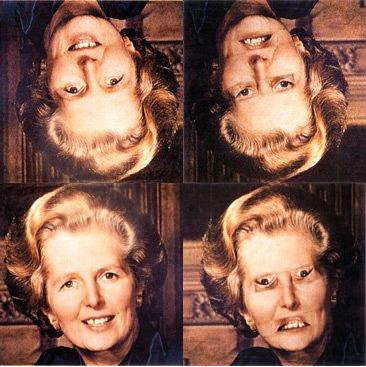 Why does the effect occur? No one knows for sure, but three possible (competing) explanations have been posited. While there is some empirical evidence to support hypotheses 1 and 2, these theories do not fit with all the acquired data. Hypothesis 3 has received the most empirical backing to date.

Essentially these researchers claim that the brain finds it difficult to interpret expressions in upside down faces, so it is hard for us to notice the changes and distortions in an upside down Thatcherized face.

Explanation 2. When viewing an object, we take into account our personal orientation independent of the object, and the orientation of the object itself. So we expect the “top” of objects to be at the top of our visual field. The fact that the eyes and the mouth are both in unexpected orientations when the picture is upside down makes it difficult for us to notice the distortion in Thatcherized faces.

We are unlikely to have a known mental map of an upside down face, since we generally see faces right side up in our daily lives. So when the Thatcherized faces are upside down, we have to rely on the inspection of specific facial features (eyes, nose, mouth, etc.). As the individual features look perfectly fine, it is difficult for us to notice much (if any) distortion. When the pics are right-side-up we can use both processing systems and spot the distortions quite easily.

Interestingly, persons who suffer from prosopagnosia (a disorder where the sufferer is unable to recognize faces but can recognize facial emotions) can spot Thatcherized faces much faster than the average healthy individual.

After using an electroencephalogram to monitor the brain’s activity when an individual looks at Thatcherized pictures, Carbon, Schweinberger, Kaufmann & Leder (2005) report:

…inverted Thatcherized faces are processed differently compared to normal faces, although they perceptually look quite like normal faces. We suggest that these differences arise early in time at the initial encoding of faces and are probably mediated by brain areas in or near the lateral occipital complex. (pg. 554)

This finding suggests that our brain knows there is a distinct difference between Thatcherized pictures and normal pictures. We are just not conscious of the discrepancy.