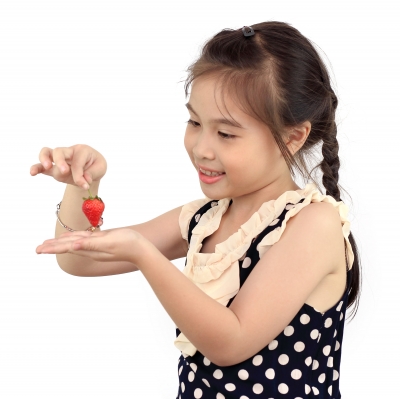 The playful lure of unhealthy fast food restaurants and the financial restrictions of school lunch programs have made it absolutely essential that children eat nutritious food at home. But as any parent is well aware, this is much easier said than done. How can concerned parents help their kids to eat healthier foods? Check out these 7 clever tips:

If your kids are not eating enough fruits and vegetables, then you should try increasing their portion size. As counterintuitive as it might sound, research conducted by food and nutrition expert Dr. Brian Wansink shows that people will pig out on just about anything, including unpalatable food, if they are given enough of it. In this particular study, Wansink and Kim (2005) randomly distributed a large or a medium sized container filled with popcorn to 158 Philadelphia moviegoers. The popcorn in each container was either fresh or 2 weeks stale. Interestingly, of persons who were given stale popcorn, those who received a large container ate 33.6% more than those who were given a medium sized serving – and this is despite the popcorn being described as “stale,” “soggy” and “terrible.” What’s the lesson for health conscious parents? Serving size can be just as influential on food consumption as taste. If you serve your kids MORE fruits and veggies then they will tend to eat more, even if they don’t fancy the flavors.

Visual perception is a vital part of food consumption. Parents need to help their children to perceive the act of eating healthy food as something fun and easy. That being said, small saucers and small bowls must be avoided at all costs. Kids do not enjoy seeing a bowl or plate overflowing with food items that they dislike. In fact, it’s a sight that will likely make them shudder. Instead, try serving healthy foods on larger plates. Let your kids see a small island of veggies surrounded by a vast ocean of clean, vegetable-free dishware. The task at hand will then appear much easier to them.

Another reason for using bigger plates is a phenomenon referred to as portion distortion. Wansink and Cheney (2005) noted that using larger bowls led to increased consumption, as persons generally assumed that it was more appropriate to consume a larger portion of food. Serving fruits and veggies in over-sized dishware will likely produce a similar portion distortion effect in kids.

3. Eat with your family

Research has shown that food consumption is significantly influenced by social factors. For example we tend to eat more when presented with meal cues such as sitting with our family at the dinner table (Wansink, Payne & Shimizu, 2010). Many persons view eating as a social event and consumption increases as we converse and interact with the persons we care about (Wansink, 2004). Chatting with your children while at the dinner table is an excellent way to divert their attention from the broccoli they are unconsciously munching on. And who knows, if you happen to touch on a particularly sensitive topic of conversation it just might motivate them to chomp on that broccoli even faster.

4. Smile as you eat your veggies

A recent study conducted by Barthomeuf, Droit-Volet and Rousset (2012) suggests that children are particularly sensitive to the emotional expressions of other eaters. During this experiment the subjects (children and adults) were shown a picture of a person with a food item that the subjects had previously said they either liked (chocolate, bread or cream cake) or disliked (kidney, black pudding, cooked sausage with vegetables). The person in the picture always looked at the food item with an expression of pleasure, disgust or neutrality. The results showed that 5 year old children were significantly influenced by these facial expressions. Smiling pictures increased the children’s desire to eat both the liked and the disliked food items. In contrast, pictures that showed a disgusted expression reduced the children’s desire to eat food items from both the liked and disliked categories. Parents, do you smile when you eat your vegetables? Do you cringe? Keep in mind that your children are watching you, and they are continuously being influenced by your own facial cues.

Using delicious and descriptive names with our fruits and vegetables can influence our children to perceive healthy food in a more positive light. Wansink, van Iteersum and Painter (2005) demonstrated that people tend to prefer foods with luscious, descriptive names, provided that the food is of reasonable quality. In their experiment, Succulent Italian Seafood Filet was rated more highly than a product called Seafood Filet, even though both food items were exactly the same. This study shows that parents should be imaginative when offering healthy snacks to their children. Never serve your kids boring old fruits and veggies. Instead, introduce them to fun and yummy characters like Tasty Tommy Tomato and Crispy Connie Carrot.

6. Keep fruits and vegetables in sight and within easy reach

In his book Mindless Eating, Dr. Wansink mentions the importance of keeping healthy snacks at eye level and well within reach. The simple fact is that we tend to eat whatever we can most easily get our hands on. “You’re three times more likely to eat the first thing you see than the fifth thing you see” Wansink explains. At dinner, it is a good idea to keep the salad bowl on the table and the desert plate out of sight. These practices bode well for the future as your children will learn to help themselves to healthy food.

7. When snacking on veggies, let kids read or watch TV

According to Dr. Wansink, people tend to increase consumption when they are distracted from the process of eating. If you prepare a healthy snack for your children but are unable to eat and/or chat with them, then let your kids read a book or watch a fun, educational program while they get their munch on. If their attention is held by a fun activity then they will likely keep on eating those celery sticks until the activity comes to an end. And the best part is, if they manage to finish their snack early, you might even be able to sneak in a few more pieces without them even noticing.

Wansink, B., Shimizu, M., & Payne, C. R. (2010). Is this a meal or a snack? Environmental cues or timing that drive food intake. Retrieved May 30, 2012, fromhttp://foodpsychology.cornell.edu/research/summary-situational-cues.html