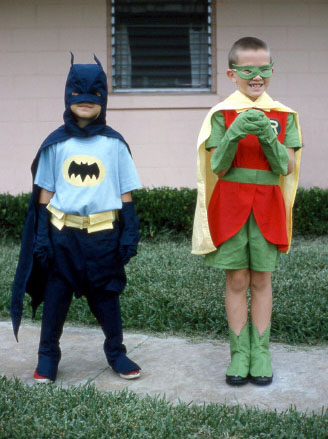 Perhaps the only thing parents would prefer more than making healthy dietary choices for their children, is to have their children willingly make those beneficial decisions for themselves. Well, based on research conducted by food psychology expert Brian Wansink and colleagues, it seems that parents might be able to encourage their kids to do just that.

What would batman eat? It is a question that comic book artist Bob Kane and writer Bill Finger probably never had to answer in all the years since they first created the legendary caped crusader. Nevertheless, this is the key question in helping kids choose nutritious foods on their own.

At a recent summer camp, Dr. Brian Wansink, Dr. Mitsuru Shimizu and Master Student Guido Camps conducted a four week study with 22 children, aged 6-12 years old. In the experiment the kids were given a choice between French fries and apple fries (thin apple slices) from a well-known fast food restaurant for their Wednesday lunches. Weeks 1 and 2 served as controls, during which the children received no priming. However, during weeks 3 and 4 the researchers presented the children with 12 photos of real and fictional role models, 6 of whom were admirable and 6 who were less admirable. For each photo the children were asked “Would this person order apple fries or French fries?” [showmyads]

What effect did asking this question have on food selection? The results showed that for the control weeks when no priming occurred, only 2 of the 22 children (9 percent) ordered the healthier apple fries. However when the children were shown pictures of their heroes such as Batman and Spiderman, and quizzed as to their (the heroes’) likely dietary choices, 10 of the 22 children (45%) ordered apple fries.

“Fast food patronage is a frequent reality for many children and their parents. Simply instructing a parent to order healthier food for a child is neither empowering for a child nor easy for a parent,” Dr. Wansink said. “Advising a parent to ask their child ‘What would Batman eat?’ might be a realistic step to take in what could be a healthier fast-food world.”

And what calculable health benefits could this simple dietary strategy have?

“On average, children who selected apple fries consumed only 34 calories whereas children who selected French fries consumed 227 calories. That’s almost seven times as many calories just from the side dish of the meal,” Dr. Wansink responded. “If you eat fast food once a week, a small switch from French fries to apple fries could save your children almost three pounds of weight a year.”

Poor nutrition and childhood obesity are real problems that millions of parents face each day. But here is one simple technique that caregivers can use to set their kids on the path to a much healthier lifestyle. So to all the parents out there, we beseech you: PLEASE LET YOUR KIDS WATCH THEIR CARTOONS EVERY SATURDAY MORNING! Because as was made abundantly clear in this study, superheroes really can save the day.