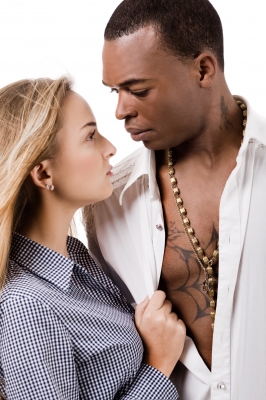 Or so the researchers at UCLA would have us believe. Assistant professor of psychology Naomi Eisenberger and psychology graduate Tristen Inagaki performed an experiment on 20 heterosexual couples in romantic relationships at UCLA’s Ahmanson-Lovelace Brain Mapping Center.

In the experiment, each boyfriend received painful electric shocks while his girlfriend’s brain activity was monitored using functional magnetic resonance imaging (fMRI). Inagaki and Eisenberger “explored the potentially beneficial effects of support giving by examining the neural substrates of giving support to a loved one.” They “focused on a priori regions of interest in the ventral striatum and septal area (SA) because of their role in maternal caregiving behavior in animals” (Inagaki and Eisenberger, 2012).

During the experiment each girlfriend experienced three different scenarios: (1) she was allowed to give support by squeezing the arm of her boyfriend at specific times; (2) at other times she was not allowed to give support and was instead given a rubber squeeze ball; (3) her boyfriend was not given any shocks and she could either touch or not touch him. [showmyads]

One of these regions, the ventral striatum, is typically active in response to simple rewards like chocolate, sex and money,” Eisenberger said. “The fact that support-giving also activates this region suggests that support-giving may be processed by the brain as a very basic type of rewarding experience.”….”Giving to others has benefits,” said Inagaki, the lead author of the study, who has been awarded National Science Foundation and Jacob K. Javits fellowships. “We even saw substantially more activity in these reward brain regions when the women were giving support than when they were touching their boyfriend when he was not getting shocked. You might think it would be more pleasurable to touch your boyfriend when he is not going through something painful, but we found the opposite, which was surprising.”

At present, the duo are conducting studies on how giving to others might reduce our own stress responses and contribute to better personal health.

Wolpert, S. (2011, November 9). ‘Tis better to give than to receive? UCLA Newsroom. Retrieved from http://newsroom.ucla.edu/portal/ucla/tis-better-to-give-than-to-receive-217764.aspx