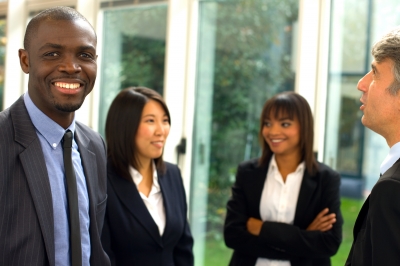 “Susan, I’d like to have a word with you about that incident during my talk about employee engagement the other day. Please, come on down to my office at about 3:00. You know which one it is? The big one on the corner with all the windows. I have a little chair for you right in front of my great big desk. Just let my secretary’s assistant know that you are here. Her name is Sandy, I think. Don’t be late. My helicopter will be waiting to take me to that executive retreat in Telluride.”

So, maybe I’m exaggerating a little. But, maybe not so much! The average salary for a Fortune 500 CEO’s is over 10 million per year. It is not unusual for them to be paid considerably more than that. But the salaries are just the tip of the iceberg. Luxury cars, private jets, a mind-boggling array of personal services like fitness trainers, landscapers, designers, financial advisors, etc. are the norm for most of those in our corporate board rooms. The companies argue that such fringe benefits are a necessary part of attracting and keeping top talent. But, there are exceptions that demonstrate how more modest, down-to-earth executives can, not only survive, but help the company thrive without all the vainglorious displays of affluence and power.

“There’s a lot of resentment these days against executive compensation and all the perks taken by corporate heads. When the Big Three automakers’ CEOs came to Congress begging for a bailout, they got a lecture for arriving in their private jets.  CBS News correspondent Barry Petersen says maybe they could learn something from the boss of Japan Airlines, Haruka Nishimatsu, who takes the bus to work,” according to a CBSNews article published mid February.

Nishimatsu is famous for standing in the lunch line with his employees, chatting with employees before and during flights, cutting his own salary ($90,000) when they had to reduce costs.

We have all heard stories of outlandish executive perks. Whether those fringe benefits actually help the company attract and keep top talent at the executive level is still an unanswered question. But, another, and possibly more important question, is what message do these perks send to the workforce and what is the impact on their performance? Every one of us has attended a company meeting during which senior executives proclaim that “employees are our most important asset,” or “We are a family,” or some variation of that theme. But, we all know that the vast majority of all communication is nonverbal. Estimates vary between 80% and 95%. So, the words play only a small part in communication. This is not a problem when the nonverbal aligns with the verbal. That is, the body language, context, tone of voice, facial expressions and so on seem to coincide with the spoken words.

What happens, then, when they do not line up? Well, people believe the nonverbal. “What’s wrong? Nothing. Yeah, sure.” So what is communicated through all of the corporate, executive perks? What do people conclude when the executives dine in their own fancy lunchroom? Ride around in their chauffeured luxury cars and limousines? Go on expensive junkets to prestige locations?

Do they (the employees) infer that they are the most important assets of the company? Probably not!  It is more likely that the employees interpret the message as one of manipulation.

“They are just saying all that stuff about how important we are so they can get more out of us without paying us any more.”

So, what is the impact of those nonverbal messages on employees’ behavior and performance? People respond to both intrinsic and extrinsic motivation. Extrinsic motivation includes pay, benefits, working conditions, punishment, recognition and so on. These are, certainly, important components of managing a workforce and much has been written about how to create fair, effective systems of rewards and punishments. But, such extrinsic sources of motivation are limited.

Intrinsic motivation comes from things like the feeling of accomplishment one has from completing a worthwhile task, pride from making a useful contribution to the organization, meeting or exceeding a difficult goal, overcoming an obstacle, doing the right thing when it wasn’t easy. Both are important and it depends on what you want or need for your company. Which one needs to be emphasized? It is easier, of course, to exert some control over the extrinsic kind of motivation. You can increase pay, promise bonuses, offer time off, throw a party or threaten to fire, impose tough new rules, etc. All of these actions can influence employees’ behavior and performance for a while. But, there is a price to pay. The more you rely on such techniques, the more clever people become at “working the system.” Too much dependence on extrinsic motivation leads to a cycle of ever increasing vigilance, supervision, and one-up-man-ship.

Creating a system in which intrinsic motivation is the primary motivator is, at first, much more difficult to establish but once done, is much more enduring and resilient. A few years ago during a series of team building interviews, I encountered a talented engineer who was very angry at his company. As I listened to his story, I discovered, much to my surprise, that he had been the recipient of a substantial reward for a new discovery. The reward was substantial (about $25,000.00). Curious about why he was so down on the company who had so generously compensated him for his discovery, I learned that even though he had been paid for his contribution, the new idea was never used. His plans were put on a shelf and forgotten. He had never forgiven the company for what he saw as a betrayal. It wasn’t about the money. He wanted to make a contribution. He wanted to see his idea come to life.

While it is easy to talk about creating an organization in which people work because they take pride in what they do, actually creating such a workplace is much more difficult. Even those companies who make a real effort to nurture intrinsic motivation and make perks and privilege less important have their challenges. A large, progressive, family-owned company that is famous for creating a culture in which status differences are unimportant (no job titles, flexible work rules, high levels of involvement, lots of power given to employee teams) still has such challenges. People know who is in favor, who is a member of the family, who has more power, etc. Realistically, you cannot eliminate such status differences completely. People will see through the camouflage. What you can do is honestly try to make these differences less important.

Here are a few thoughts on how to do that:

One of the most effective executives I have ever known (Walter) had a really simple formula for success. Every morning on his way to his office, he walked through the factory and said “hello” to every single employee (several hundred) before he started his office work. He knew most of them by name. If he couldn’t remember a name, he would apologize and ask for it, then write it down and learn it. His door was open for at least part of every day. He didn’t lie. He could be very tough sometimes. Not everyone liked him. Not everyone agreed with him. But, every single employee respected him. Other executives in the company thought he was crazy. “It takes you more than an hour every day to do say “hello” to every employee.” During one of the company’s most difficult downturns, most of the executives had extreme difficulty maintaining the levels of performance that was required. But, Walter always seemed to meet his objectives. The fact is that Walter’s people worked their rear-ends off to help him meet his goals. They realized that not all leaders respected them the way he did and they responded.

Yes! Walter’s office was bigger. He made more money. He drove a nice car. But he didn’t rub it in. He worked hard to make those things less important. So, don’t pretend that there are no status differences but work hard to create an environment in which they don’t rule.