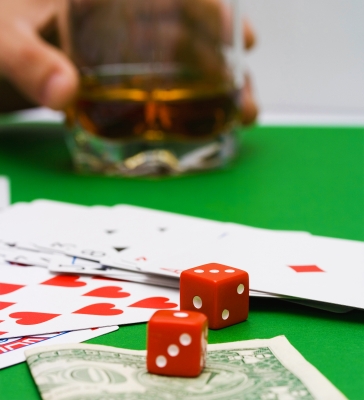 Gambling has become one of the most popular pastimes for people today. Whether it’s betting on your favourite football team, playing the slot machine at a local casino, or pulling the trigger in a risky round of Russian roulette, gambling never seems to lose its appeal. It’s easy to understand why people decide to take up gambling – who wouldn’t want to earn a few extra dollars without having to break a sweat? We could even explain why a person who has already hit the jackpot decides to play again; he’s likely riding on a high and obviously has a few extra bucks to spare. But how do we explain the behaviour of those persons who continue to gamble despite consistent losses? Most of us would take the position of famous comedian, W.C. Fields – “if at first you don’t succeed, try, try again. Then quit. No use being a damn fool about it.” Yet many gamblers who have suffered great losses refuse to quit. Instead of throwing in the figurative towel, they throw in more and more resources, hoping and praying for the elusive win. On the surface this might seem irrational, but there are several psychological reasons why some gamblers never seem to get enough. Five main reasons are explained below.

You don’t have to be a psychologist to know that reinforcement strengthens behaviour. Reinforcement may be provided on a continuous basis, such as when a child gets $1.00 every time he wins a game of Scrabble, or on a partial basis, as when a person wins at the slot machine after 6, 20, or 100 tries.  As counter-intuitive as it may seem, behaviours tend to persist longer when they are partially rather than continuously reinforced, and this is a major reason why casinos are hardly ever out of business. People don’t expect to win every single time they gamble so when they encounter a loss or even a string of losses, it comes as no big surprise. It’s simply counted as part of the game. Nevertheless, gamblers do expect to be reinforced some of the time and it is this expectation, this belief that “I’ll get lucky next time” that motivates them to continue. They can never be sure which bet will produce rewards but they believe that if they play long enough their patience will eventually pay off…literally!

This describes the tendency of individuals to overestimate the probability of an occurrence simply because it comes readily to mind. Many people believe that plane crashes occur more frequently than they actually do, because such accidents usually receive extensive news coverage, and are therefore more easily recalled than say, car accidents. Cases of persons winning the lottery jackpot are also widely publicized, causing them to stand out in people’s minds. Gamblers might therefore overestimate the probability that they will experience similar winnings because they have vivid memories of these rare success stories. Even when the odds are against them, their faulty reasoning leads them to believe that they have a great chance to win.

People often make the mistake of thinking that future events occurring in a random sequence will be influenced by past events. This error in thinking is very common among gamblers which explains how the phenomenon got its name. For example, if a person flips a coin 10 times and it comes up heads every time, he might reason that he will get tails on the next try because it is “overdue.” In reality, the probability of getting tails on the 11th try is still 50% – the same as it was on each of the previous 10 tries. The gambler’s fallacy might cause persons to continue investing in a game of chance even after suffering terrible losses, because they think they are “due” for a win.

Although gambling activities are often directed solely by chance, many gamblers mistakenly believe that they have some amount of control over the outcome. Thus, they might blow on the dice before they throw or perform some other ritual before a game, assuming that such actions will increase their chances of winning. Since people are more likely to invest in an activity when they believe they can influence the results, the illusion of control actually encourages gamblers to persist in their efforts. As Moghaddam & Studer (1998) explain:

Chance will work in the gambler’s favor once in a while, and if success comes early then the illusion of control will be even more firmly entrenched. If gamblers start with some wins, then their estimates of their ability to beat the odds become even more inflated, often surviving a long string of losses” (p. 2).

This refers to the fact that people are usually more sensitive to losses than to gains of equal value. In other words, the pain an individual feels over losing $100 will likely be greater than the pleasure he feels over gaining that same amount of money. As such, a person might go through more trouble to collect money owed to him than to try to win a prize of equal worth. After experiencing a string of losses, a gambler might continue to invest time and money beyond a reasonable limit, not because the potential gain is especially appealing but because the pain of past losses is agonizing.  Even when gamblers are aware that they cannot possible win back all that they have lost, they often persist in desperate attempts to recover at least some of their losses.