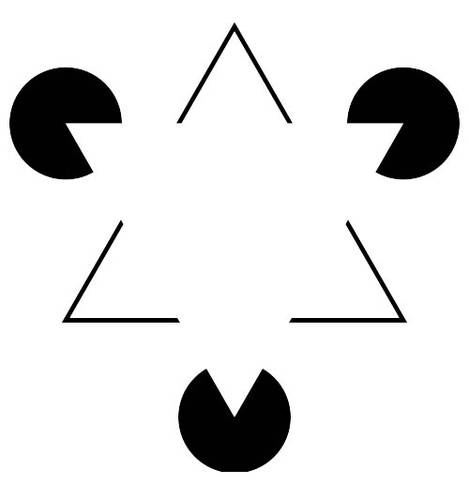 Created by Italian psychologist Gaetano Kanizsa in 1955, the Kanizsa Triangle is a classic example of illusory contours. As shown in the image above, a white equilateral triangle can be clearly perceived even though there are no explicit lines or enclosed spaces to indicate such a triangle. The white triangle actually appears brighter than the surrounding white background, even in areas where there is no change in luminance or color.

Gestalt psychologists use the Kanizsa Triangle to describe the law of closure, which claims that objects grouped together are seen as a whole. This means that we perceive objects as being whole even when they are incomplete; we ignore gaps and we complete contour lines to form familiar figures and shapes. For example, in the Kanizsa Triangle Illusion we readily perceive three black circles and two triangles, even though there are technically no circles or triangles in the image.

The illusion challenges the reductionist approach to vision as what we see in the image is not merely the sum of all its parts. We see something more. We actually perceive objects that are not really there. “Only by a holistic vision–seeing the three separate ‘pac-men’ as parts of a single whole–do we perceive a triangle” (Simmons, 1996).

Simmons, S. (1996). About the triangle… Princeton.edu Website, Retrieved on May 1, 2012 from http://www.princeton.edu/~freshman/kanizsa.html