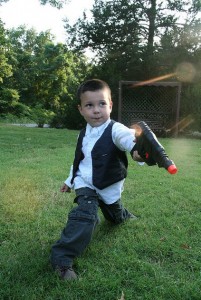 Attention Deficit/Hyperactivity Disorder (ADHD) is a childhood developmental disorder characterized by a persistent pattern of inattention and/or impulsivity and hyperactivity. These behaviours are more severe and occur more frequently than expected for a child’s age and developmental level. In order to be diagnosed ADHD, the pattern of inattention and impulsive/hyperactive behavior must be present in at least two settings (e.g., home and school). Additionally, some of the symptoms must have been evident before age 7. Although many individuals manifest symptoms of both inattention and hyperactivity-impulsivity, some may display a predominance of one pattern over the other.

[showmyads] Inattention, one of the core symptoms of ADHD, refers to a lack of sustained attention. Individuals with ADHD have a short attention span and are easily distracted, whether by internal events (e.g. personal thoughts) or by external stimuli which other individuals could easily ignore (e.g. bright colours, the movement of a person nearby). During a conversation, persons with ADHD may appear as if they are not listening or they may regularly shift from one topic to another. They also change activities frequently, switching from one incomplete task to another. As expected, they usually dislike, and often do poorly on tasks requiring sustained mental effort and concentration.

Impulsivity, another primary symptom of ADHD, is a result of poor self-control and self-regulation. Behaviours characteristic of impulsivity include impatience, acting before thinking, failing to wait one’s turn and frequently interrupting others. Persons with ADHD may also fail to listen to instructions and have difficulty with tasks involving a high degree of organization.

Hyperactivity is perhaps the most salient behavioural feature of ADHD. It can be manifested in numerous ways, depending on the individual’s developmental level. Young children may dart back and forth across a room even when it is inappropriate, jump on tables and other furniture and have difficulty remaining seated. Adolescents and adults may display less conspicuous signs of hyperactivity, such as fidgeting, or may report an inner feeling of restlessness.

ADHD is usually diagnosed in childhood. As individuals enter late adolescence and adulthood, some of the symptoms, particularly motor hyperactivity, usually subside, although a small percentage of persons continue to experience the full range of symptoms into mid-adulthood. The causes of ADHD are still unknown but possible contributing factors have been suggested. These include genetic factors, impairments in neurotransmitter systems in the brain, prenatal toxic exposure and subtle damage to the central nervous system in utero.