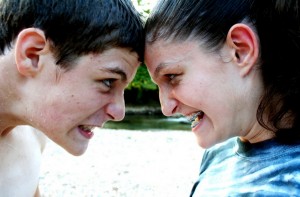 Conduct disorder is a disorder of childhood and adolescence involving a persistent pattern of behavior in which social norms and rules, as well as the rights of others, are repeatedly violated. Children with this disorder may be described as cruel, impulsive, aggressive and out to control. The symptoms of the disorder are typically grouped into four main categories according to the diagnostic criteria outlined in the DSM-IV. The categories are:

1. aggression towards people and/or animals – for example, bullying, threatening or fighting others

2. destruction of property – for example, deliberately setting fire to other people’s property

3. deceitfulness and theft – for example, breaking and entering, shoplifting and lying

4. serious violations of rules – for example, running away from home or staying out late at nights

[showmyads] While specific antisocial behaviours, such as lying and stealing, are quite prevalent among children and adolescents, the proportion of children who persistently display a combination of such behaviours, warranting a diagnosis of conduct disorder, is fairly low. Bird (2001) cited a variety of studies around the world showing that only 4-6% of children between the ages of 8 and 16 meet the criteria for the disorder. The research findings also revealed that the disorder is more common among children who are from low socio-economic backgrounds and who have parents with antisocial personality disorder and alcohol dependence.

More males than females are diagnosed with conduct disorder with the ratio ranging from 5-11 males to 1 female (Bird, 2001). However, the ratio decreases as individuals move from childhood to adolescence. Conduct disorder tends to occur at a younger age in boys than in girls – the average age of onset for boys is between 10 and 12 years, while for girls it is 14 to 16 years. Of all the symptoms of conduct disorder, boys are more likely to engage in fighting, stealing and vandalism, while females are more likely to lie, run away, and engage in substance abuse.

As is the case with many psychological disorders, there appears to be a genetic factor in the etiology of conduct disorder. However, environmental factors seem to have a greater influence on the development of this disorder. Such factors include neglect, reinforcement of inappropriate behavior, inconsistent or inappropriate discipline, as well as lack of warmth, stimulation, and support. Insecure parent-child attachment, parent psychopathology and family instability are also implicated in the development of conduct disorder.

Child abuse and maltreatment are significant predictors of conduct disorder. Children who experience such treatment usually have difficulty expressing their feelings verbally and are therefore inclined to do so physically. They also tend to be hypervigilant and may perceive nonthreatening situations as potentially harmful, leading them to respond with aggression (Sadock & Sadock, 2004). In addition, children with this disorder misperceive social cues and have poor problem solving skills. Thus, they generate fewer alternatives to problematic situations, perceive a hostile basis to problems and anticipate fewer consequences than other children (Joughin, 2003).