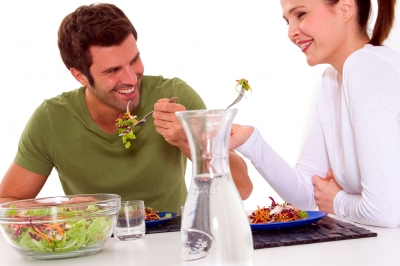 Want to eat less and lose weight? Rather than jumping on the next dietary fad, why not try these 5 tips to reduce your food intake.

[showmyads] Eating more snacks might sound counterproductive, but researchers at Cornell University have suggested that persons presented with “snack cues” (such as paper plates and napkins) consume significantly less food than persons presented with “meal cues” (such as ceramic plates, silverware, cloth napkins). The results of the experiment were “most pronounced among participants who were hungry” (Wansink, Payne & Shimizu, 2010, p.2). Factors such as sitting to eat and eating with one’s family increased the perception of a meal being eaten as opposed to a snack, and led to increased food consumption.

Quite often, people find themselves gaining weight because they rely on food not only to satisfy hunger, but also to ease stress and induce a positive mood. Comfort food promotes the release of endorphins, which are neurotransmitters that interact with opiate receptors in the brain to reduce our perception of pain (Stoppler, 2007). In short, endorphins make us feel really good. But rather than chowing down a tub of ice cream in order to improve your mood and risk packing on the pounds, we suggest that you turn to “that special someone.” If you don’t have such a person in your life, then it’s better to work on finding him/her rather than the calorie-rich alternative. Not only will having a boyfriend/girlfriend influence you to take better care of yourself physically, he/she can also be there to provide the comfort you need during life’s rough patches.  And as a bonus, there is an incredibly fun activity that couples can enjoy, which also promotes high endorphin release.  You guessed it, skiing.

3. Be mindful of the speed limit

“Chew your food!” While your mom might have been more concerned with you not eating like a pig when she gave you those orders, there are actually numerous benefits to chewing your food properly. Many people eat so quickly that they fail to realize when they’ve already satisfied their body’s craving for food and end up taking in more calories than they really need. The mechanical and chemical processes of digestion both begin with chewing. By eating more slowly you will break your food down into much smaller particles and well as give it more exposure to the digestive enzymes in your saliva. This facilitates the absorption of more nutrients and gives your brain enough time to register when you are really full, thereby preventing overeating (Rubin, Rubin & Vilson, 2006).

There are various social factors which can impact not only what we eat, but how much we eat. Our association with our friends is among the most powerful of these influences. Many persons view eating as a social event and eat simply to be around other people (Wansink, 2004). If we have friends who are mindful of eating healthy foods and monitoring their portion sizes, then those positive traits will likely influence our personal eating habits as well. Birds of a feather, and all that jazz.

In today’s society there is a very strong association between watching the television and eating food. We have popcorn, hotdogs, nachos, raisinets and other popular TV snacks. Then for the heavy eaters we invented TV dinners.  We have conditioned ourselves to eat while watching TV and that is why those shows on HBO are never quite as good if we aren’t munching. Additionally, fast food commercials influence our children to select unhealthy foods over healthier options (Boyland et al., 2011). Watch less, weigh less. Or if you’re too much of a TV junkie to do that, then at least resist the urge to eat while you watch. Sure you can still have dinner and a movie, just dont have them together.

Wansink, B., Shimizu, M., & Payne, C. R. (2010). Is this a meal or a snack? Environmental cues or timing that drive food intake. Retrieved January 9, 2012, from http://foodpsychology.cornell.edu/research/summary-situational-cues.html