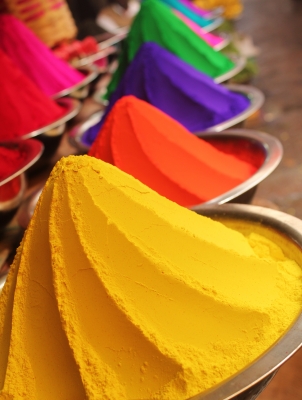 Colors are everywhere. They play a large part in how individuals present themselves through their wardrobe, their homes, and their belongings. Studies have demonstrated how colors can grab and retain attention, provoke emotional responses, and influence a person’s attitude (Sable & Akcay, 2001). As a result, companies carefully select the colors they use on brands, logos, mascots, retail stores, advertisements, packaging, and even products themselves to influence their target market. Ultimately, marketers want you to create positive associations with their companies, and do so in part by acting on your strong psychological reactions to different colors.

Most of our responses to color are influenced by a number of variables. Demographics such as gender, age, and ethnicity have a strong impact on how we perceive different colors, while our differing physiological responses to these colors influence our emotions (Sable & Akcay, 2001). Research demonstrates that emotional reactions to different color hues are uniform overall, although there are some individual and cultural dissimilarity. Warm colors, for example, have been said to “possess strong excitation potential and high arousal qualities” (Bellizi, 1983), while cooler colors tend to be more associated with relaxed mood states.

While certain unencumbered physiological reactions to colors are universal, the emotional effects depend largely on an individual’s culture. Foreign languages, regional articulations, and multiple meanings of words often hinder content and slogan advertising for International companies.

As a result, marketers turn to strong non-verbal cues, such as color, to express their sales pitch and have a culture-specific aesthetic appeal.  From an international marketing standpoint, it is crucial to understand that color hues do not have universal meanings and associations.

Orange for example, is the most sacred color in the Hindu religion, but has no significance to many other religions. The color itself is not even acknowledged as a color in Zambia and a point of interest is that orange is the least favorite color in the U.S., but the most favored in the Netherlands. (p. 36)

Below is a brief overview of a few universal physiological associations and culture-specific emotional meanings of the most common color hues:

Red – This is considered a lucky color in Argentina, China, and Denmark, but unlucky in Germany and Nigeria. It is synonymous with love in China, Japan and Korea, while expressing ambition and desire in India (Sable & Akcay, 2001). The color red has physiological associations with “power, energy, warmth, passions, love, aggression, danger” (“Psychological Effects of Color,” 2010).

Blue – The most popular and most common corporate color in the world. It is regarded as “cold and evil” in East Asian countries but symbolizes warmth in the Netherlands. Blue represents death in Iran and purity in India. It is considered a feminine color in the Netherlands and Belgium, but masculine in Sweden and the United States (Sable & Akcay, 2001). The color blue has physiological associations with “trust, conservative, security, technology, cleanliness, order” (“Psychological Effects of Color,” 2010).

Yellow – This color represents happiness, joy and royalty in China, but jealousy in Russia. It denotes infidelity in France but warmth in the United States (Sable & Akcay, 2001). The color yellow has physiological associations with “optimism, hope, philosophy, dishonesty, cowardice,” (“Psychological Effects of Color,” 2010).

Green – This color “represents danger or disease in Malaysia, envy in Belgium, love and happiness in Japan and sincerity, trustworthiness and dependability in China,” (Sable & Akcay, 2001). The color green has physiological associations with nature, health, good luck, jealousy and renewal (“Psychological Effects of Color,” 2010).

Purple – Symbolizes fear and sin in Japan, anger and jealously in Mexico, but represents love in China and South Korea (Sable & Akcay, 2001). The color purple has physiological associations with spirituality, transformation, royalty, mystery, cruelty and arrogance (“Psychological Effects of Color,” 2010).

What company comes to mind when you think of the color red? Is it Coca-Cola? Is it State Farm Insurance? As more companies globalize and enter the international market, the use of color has become more important than ever before. International brands such as IKEA, Wal-Mart, Home Depot, Heineken and Kodak use color to attract attention and distinguish themselves from their competitors. Their marketing teams understand how color connotations change on a cultural level, and use this information to reinforce product appeal in their advertisements.

It is very common for individuals to judge a product primarily on appearance rather than utility and function. The idea of buying a computer or a television simply because “it looks good” is prevalent when consumers have little time to devote to more suitable comparison factors such as technical specifications and performance. And marketers know that in today’s hectic world, each person sees his/her time as limited and invaluable.

Companies spend millions of dollars on their marketing campaigns. They want you to think of their brand when you think of a specific color, and nothing else. For example, USB Memory Direct, a promotional flash drives company, gives their clients the option of choosing colors that represent their clients’ businesses. The goal is for a certain specific color, or a set of colors to be associated with a specific company.

Color has become a core piece of the marketing puzzle. It has a strong psychological impact on our everyday lives and is often the very first thing we notice. So the next time you see a billboard or a logo, think about how it affects you psychologically and emotionally. Chances are, the color used was a key marketing strategy implemented to elicit that exact emotional response.

V.H. Clarke holds a Bachelors degree in English from the University of Hawaii. He works as a writer with www.usbmemorydirect.com and enjoys surfing and mountain climbing in his spare time.