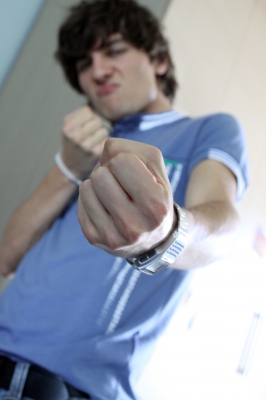 He further explains that they usually have a “hypersensitive, quasi-paranoid attitude” (p. 58) where they interpret others’ intentions as threatening and therefore react with inappropriate hostility. Regardless of the consequences of their misdeeds, these children do not usually express guilt or remorse. Yet behind their façade of toughness hides a fragile sense of self (Bird, 2001).

Psychodynamic theories emphasize that conduct disorder is not a reflection of the child’s actual personality structure but represents a symptom of intrapsychic tensions in the person. The nature of the conflicts and the motivational causes behind the anxiety leading to deviant behavior are quite varied. They may involve things such as an unconscious need for punishment, the desire to punish one’s parents, or efforts to prove one’s masculinity (Shore, 1971). Regardless of what these needs are, the purpose of symptoms such as aggression and misconduct is to satisfy these needs. [showmyads]

From a psychoanalytic perspective, the core problem in conduct disorder is a defective ego. As Shore (1971) highlights, the functions of the ego include “tolerance for frustration, the ability to delay gratification, the adequate functioning of guilt, the development of sublimations and the evolution of self-esteem” (p. 465). When these functions are not adequately enforced, delinquent behaviours tend to result.

The ego is not the only structure implicated in the development of conduct disorder; the superego is also involved. From Freud’s perspective, the superego is an extension of the ego and develops from an internalization of societal norms and standards through identification with the values of primary caregivers. While Freud used the term ‘superego’ and ‘ego ideal’ interchangeably, Bird (2001) makes a distinction between the two. The ego ideal is an image of the perfect or ideal self. The superego, which ultimately acts as the individual’s conscience, is constantly comparing the actual self with the ego ideal and punishes the ego through guilt whenever there is too much disparity between the two. According to Jones (1926, cited in Bird, 2001), the superego criticizes the ego whenever it gives in to an impulse that is at odds with the ego ideal, thereby resulting in guilt. The psychic pain resulting from such guilt motivates the individual to punish himself and to avoid similar behavior in the future which could result in equal discomfort. Children with conduct disorder, however, do not experience such guilt over their misdemeanors because of underdeveloped superegos. The lack of punishment from such a superego means that unruly children feel no need to change their behavior, which explains why their aggression and violation of social rules tends to be recurrent.

But how is it that children develop superegos that are weak or defective? There are a variety of causes, including parental deprivation, lack of affection as well as lax and erratic discipline. Since the superego is actually an internalized image of parents, the absence of such ones almost inevitably results in incomplete internalization or a defective superego. Even when parents are present, if they fail to show warmth toward their children, it is hardly likely that such children will identify with them and internalize their values. Also, if parents administer discipline in a lax and inconsistent manner, then the child’s superego will be too weak and erratic to effectively control primal impulses that push for expression (Schoenfeld, 1971).

In other cases, the child’s superego is well-developed but the standard to which it is comparing the child’s behavior (the ego ideal) is flawed; this too many contribute to conduct disorder. Adelaide Johnson (1949, cited in Bird, 2001) applied the term “superego lacunae” to such children. They display antisocial behavior in some areas because their superegos are trying to conform to the requirements of a flawed ego ideal, resulting from identification with the flawed superegos or values of unethical parents (Bird, 2001).

On the other hand, conduct disorder can also result from a superego that is overly strict and condemning. As Schoenfeld (1971) explains:

In such a case, the very presence of … primitive childhood wishes…may so offend the superego as to cause it to engender considerable unconscious guilt. And, paradoxically, in an effort to expiate this guilt, the youth may actually commit crimes with the unconscious aim of being caught and punished. (p. 473)

From a psychodynamic perspective therefore, conduct disorder results when the process by which the ego, ego ideal and superego develop, goes astray. Children who are affected in this way will almost inevitably have difficulty balancing these three mental structures in order to arrive at an equilibrium.