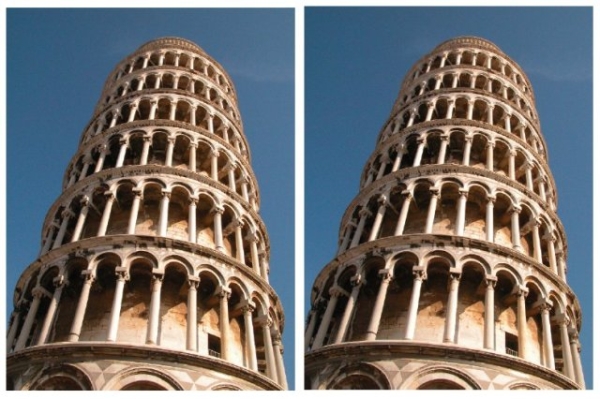 If so, your assumption is perfectly natural. In reality though, both pictures are identical and the angles of both towers are exactly the same (you can prove this to yourself by printing the pictures and overlaying one image with the other). So why do we perceive the tower on the right to be more precariously positioned, if both towers are in fact identical? It is because our visual system treats the two pictures as a part of a single scene.  When tall adjacent structures that rise at the same angle are photographed together in a single scene, their image outlines converge as they recede from view, due to perspective.

To illustrate this point, consider the picture of the Petronas Towers below: 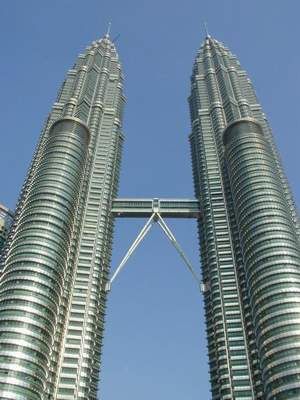 In this single scene photo, the Petronas Towers appear as if the tops of the buildings would touch if they were built any higher. The image outlines converge.

The difference with the “Twin Towers of Pisa” is that we have taken the image outline of the leaning tower and repeated it, so the two image outlines are parallel.  Our visual system assumes that they must be diverging as they recede from view, and this is what we see.

In commenting on the difference between the Petronas Towers and the “Twin Towers of Pisa” Kingdom, Yoonessi and Gheorghiu (2007) write:

Both towers (Petronas Towers) are physically vertical, but in the two-dimensional projection their corresponding outlines are not parallel but converge as the towers recede into the distance. Our knowledge of perspective however compensates for this and leads us to perceive the inclinations of the two towers veridically. It follows that if the corresponding outlines of a pair of physically identical, receding objects are parallel in the two-dimensional projection (Twin Towers of Pisa), the objects cannot be physically parallel but, instead, must be diverging as they recede from view. (p. 475)